What a party, what a gift to be once again communing with you… and you and you! Dan Kelly here aka Shri Fugi Split, two names, same guy. Instantiated in your consciousness, teleported into your moment through bouncing speaker diaphragms and maybe even glowing pixels, technology is your excuse to make this imaginary me, actual. You’re an adventurer for letting me in, courageous and very creative. What will you make me say and do this episode I wonder?

Having muddied the water, let’s dive right on in.

By now you should know that we’re looking at scenes from the open source sci fi featurette, Daughter of God and requesting feedback. How to get feedback is also worthy of our attention. In Episode 075 I flippantly fast forwarded through the data because frankly, I prefer to be a little more zoomed out. Plus we don’t have a lot of time in these more concise episodes for tons of detail and meandering. Where’s the beef?!

From now on, I’m only giving an executive summary of the analysis, if you’re fascinated by the nitty gritty details, be like Ann and Pam and check out the transcription.

I was so excited about the potential for affinity on Ello.co, but ever since I started taking an interest in other members there, my views have crashed into the double digits. That’s gotta be a coincidence, right? Why should I be downgraded for appreciating the community? If Ello.co has an algorithm, it’s whacky. Since I’m already fucked on Ello, I’m just going to continue checking out the loveliness there. From now Nuts and Bolts is going to exclude double digit performance on platforms like Ello and Twitter.

Here’s the latest stats for feedback videos on Facebook… 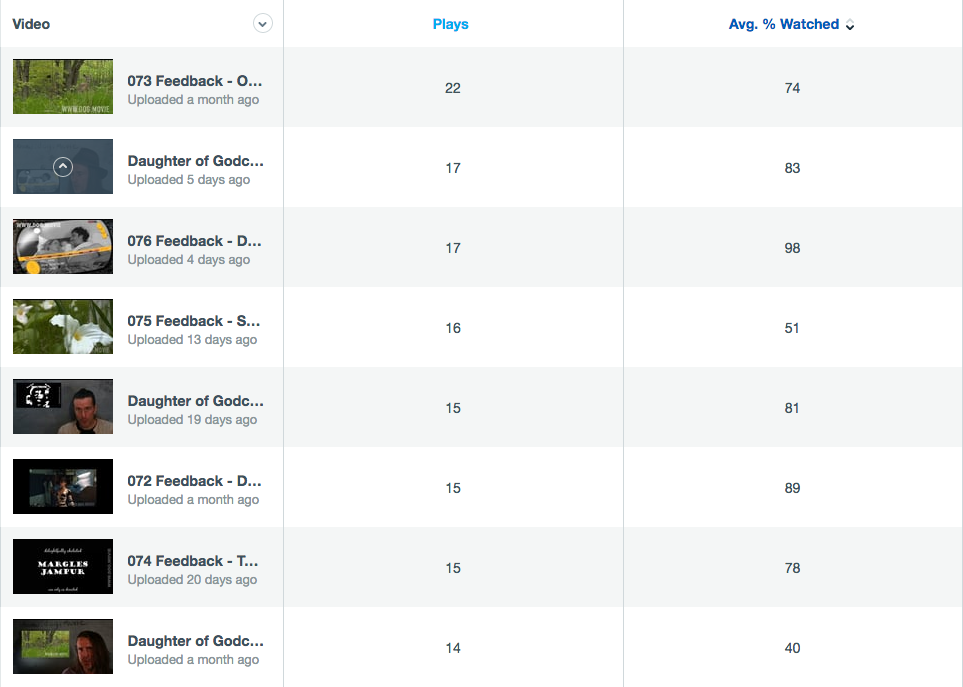 A table comparing scene performance across all platforms would be a cool resource.

On Facebook, Open Season is the leader so far with 205 views and 71 minutes viewed. 71 minutes divided by 11 seconds is 387 views. Because Open Season is so short, I interpret the difference between reported and calculated views as not that viewers didn’t finish watching as one would expect with longer videos, but rather that the scene cycled over and over in the window, whether the viewer was watching or not. In other words, views are counted either when the scene is scrolled into the window or maybe when the sound is turned on, and minutes viewed is just how long the video loops while visible, regardless of whether a friend is watching the video or checking out an ad or IM.

On Vimeo, there were 17 plays with 98% of the video watched. Again challenging the older Open Season with 22 plays and weirdly only 74% watched. Maybe my assumptions on Facebook are wrong, I’m going to have to contact Vimeo support because the engagement graph indicates 100% of Open Season video was watched.

Low performance platforms are now excluded from reporting. Facebook and Vimeo rank Do It Again as the second most watched scene, with potential for outpacing the most watched, Open Season in the weeks to come. Further research is needed for Vimeo and Facebook to resolve some contradictory data.

That feels so much cleaner compared to rattling off all those numbers and equations. Progress!

Do It Again shows a lot of promise for capturing cognition, yet only three of our most dedicated core collaborators offered feedback. Why didn’t more folks chime in? I’m guessing the late release was a factor, I didn’t post until Thursday afternoon. Early Wednesday posting (UTC-5) seems to be the most productive posting time.

For just three people commenting, feedback was dense and instructive.

I take it you mean “Watch it over and over again”! Hahh, this is both hilarious and silly and I’ll add cute and sweet… and bizarre! In the midst of a feature there’s a bit to take in that seems it may always leave one of the viewers sensory inputs lacking while focusing on another but I myself relish in layers of storytelling and the questioning of how, why and what my subconscious brings feeling-wise to the fore that add to the over all flavor and also makes re-experiencing a second time a whole new experience like noticing the different flavors in a wonderfully complex experimental humus or insert dish of choice. Yum! Haha!

Joe speaks of multiple sensory modalities being stimulated. I might interpret this as there was too much for Joe to take in with just one viewing so he watched again… and again. I’m of two minds about this. The scene should be cohesive and coherent the first time through, or at least the gist of what the scene is trying to convey should come across. Conversely, discovering more of the story the second or third time through is exciting.

Based on Joe’s comment, enough comes across to know that the scene is almost working. I can’t reveal more of the backstory because we’re probably going to revisit this scene and I want to keep impressions fresh.

I talked to Joe on the phone a day later.

He said, “The Eye in the Pyramid, I wondered if I was watching the Illuminati channel and guessed that the other circles (I couldn’t make them out, some kind of animal and maybe a syringe) were other channels or maybe aspects of this channel. When I replayed looking at the details, I noticed there were monitors of the heart and something else.”

Again, these details of Joe’s perception are super helpful. I really wanted to tell him more about the scene so we could hash out specifics, but that will have to wait, I love his fresh eyes. His perception is both unique and acute, he’s like 1000 grit sandpaper, so fine.

Joe also gave me a great idea about how to take things a little easier. If a week gets busy, reissuing scenes after implementing feedback might be less work than posting brand new scenes.

Seamus via dog.movie wrote an elevator pitch for another movie. I love when he does that. Here’s an excerpt…

The videos took the Chans by storm. The basement dwellers were transfixed. They couldn’t stop watching. The feels were too real! These videos were unscripted, the dialogue un-forced, and the emotions were genuine. Was this what these men were missing out on? Was this what they could have had, had they just been socialized properly?

James via dog.movie was both annoyed and intrigued by the distracting detail, I had to re-watch it five times to take everything in. He also wondered why the future  looked like a black and white tube TV from the 50s. I replied that maybe bandwidth was an issue or that technology devolved. I can’t really explain without giving away the whole show.

Anyway, feedback from these dudes is especially amazing since I posted this scene not only without any backstory but zero zilch context. Who is this man and this woman? There’s no clue. Joe and Seamus just ran with the moment, Seamus to the extent of writing flash fiction, much as Allison riffed off of Wall Street Underwater back in Episode 070.

The gurgling of gentle river current and the chanting of devoutees echoes of steep rock walls. Far above, a massive derelict is silhoutted against the azure blue, a rust pitted and ancient remembrance of the long ago.

Here’s the feedback question… What (if any) connection is there between this scene and Elon Musk’s space car? Every answer is right, and feel free to totally blow off this question and just run with whatever thoughts and feelings come up.

You’ve been up a lazy river with Episode zero double seven of the Daughter of Godcast, another gorgeous number and another scintillating episode on our way to episode One zero zero and then likely higher if we can all avoid getting plowed by night giants, dark drifters crossing our path. Enough hints, I won’t mention episode 033 or Randall Carlson because you could just go there and find out pretty much everything there is to know about catastrophism and cars in space. Meanwhile, if this podcast is a guilty pleasure, I’m glad you keep coming around. If this is your very first time, I trust you feel special because heavens to mergatroid, you are. You are the reason I write, read, and get all gussied up around Tuesday, take a bath with real soap and scrub all the rust pigments from under my fingernails and loofah my skin to a spiritual translucence, so that my divine glow is visible even across the internet. Surprise, I’m only in your imagination, I’m a mirror, you’re the one that’s glowing as only gods can.